BLUE is a son of the first Paint $1M NCHA sire, Color Me Smart.  Color is now producer of over $2M in earners.  My Angel Of Blue is a full sister to Peptoboonsmal.

His dam comes from foundation quarter horse bloodlines.  Her bloodlines include Gambling Doc Bar and Two Eyed Jack.  Kiowa Dusty was a cutter in the mid 1960s that sired colts on the Oklahoma's Bar B Ranch.  This mare is 75% quarter horse blood in her second generation.

TRUPER stands at 15.3 hands tall and 1,200 pounds.  TRUPER has the basics of foundation reining work done by Kim Ferguson.  At Sliding K Performance Horses, Kinzy Donnelly started him for roping.  In training at Gary Wells Ranch Inc., TRUPER took 4th in Open Junior Heeling at Houston.  At Waco's Memorial Day Show, TRUPER got 4th in Open Junior Heeling and is the Junior Steer Stopping Circuit Champion.  He was ridden by Jeff Carney.  At the World, he placed 10th in Heading with Gary Wells. 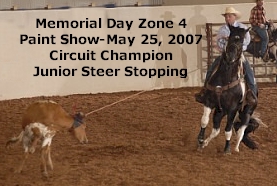 
In January 2008, BRAZOS has been started and excelling at Tom Neel Ranch in Milsap, Texas.

Currently, he is in training with Donna Weisberg of Palmer, TX.